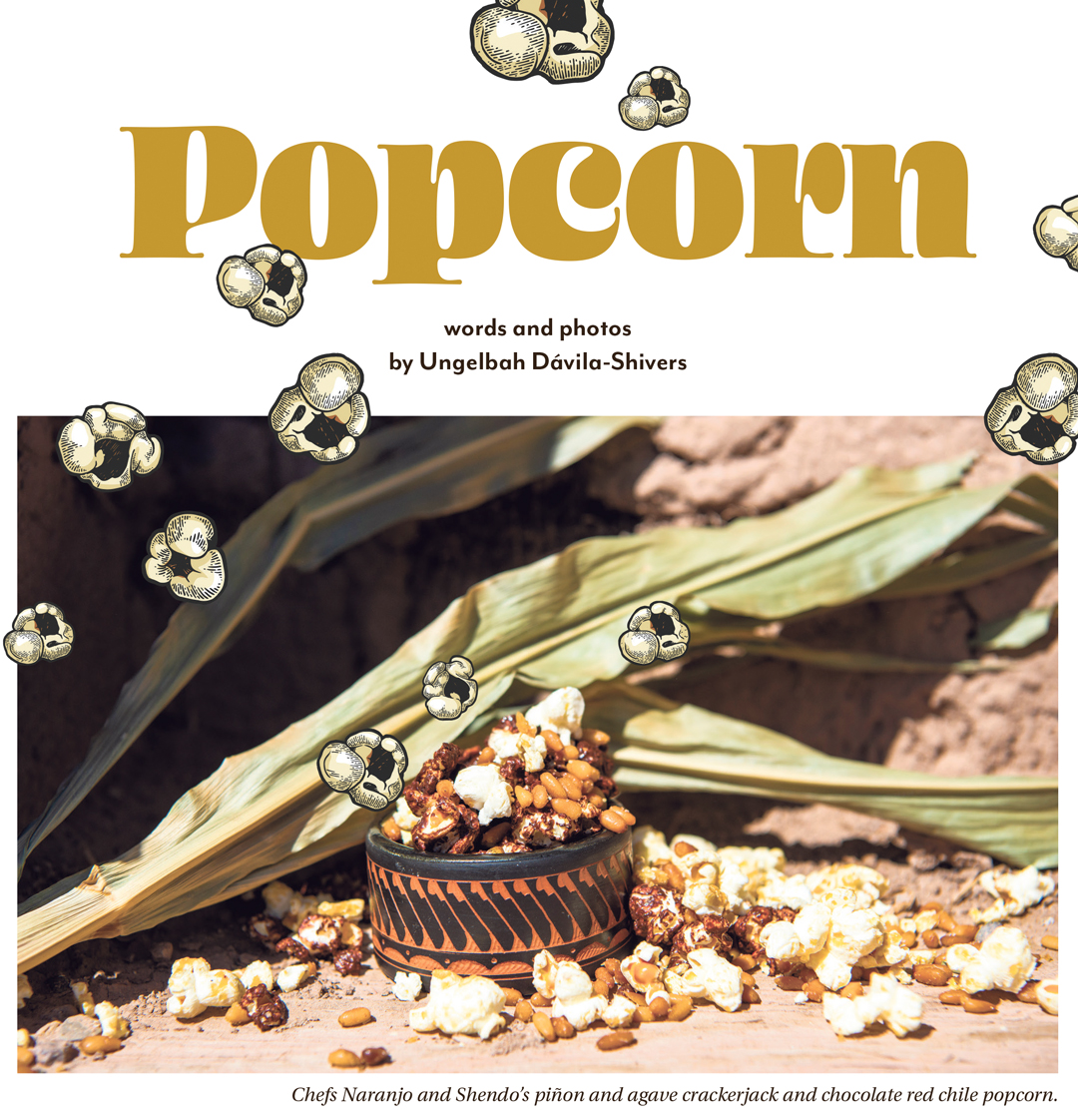 Tl​he Indian Pueblo Cultural Center buzzes with bodies arriving for a night of Indigenous fine dining. The air is musky with sage smoke as the sun lowers herself behind the great muraled walls of the courtyard where Indian Pueblo Kitchen’s executive chef, Ray Naranjo, citizen of Santa Clara Pueblo and the Odawa Nation, and Chef Benjamin Shendo, citizen of the Pueblos of Jemez and Cochiti, have prepared a meal honoring the foods of their homeplaces.

Guests watch performances by the Yellow Bird Indian Dancers, sipping on glasses of Vidal blanc, Aglianico, and Chambourcin from Sheehan Winery and nibbling on popcorn flavored with chocolate and red chile, maple and mesquite, piñon and agave, and cota tea.

The tale of how America’s favorite movie theater snack has made its way from the opening credits at the box office to an appetizer for four-star dishes like Zuni salt trout en papillote and essence of squash consommé is one of the ouroboros, except this serpent tail is covered in butter and made of corn.

Some of the oldest ears of popcorn in the world were discovered right here in New Mexico in 1948 and 1950, in the Bat Cave south of Truth or Consequences. They ranged in size from smaller than a penny to two inches long, and dated as far back as four thousand years ago. That makes popcorn one of the earliest foods cultivated in the Americas, which isn’t that surprising when you consider that all you need are popcorn kernels and fire.

Perhaps popcorn continues to captivate the imagination because of how well suited it is for culinary creativity. Inside the moisture-resistant hull of a seed, the endosperm is made of a hard, dense starch with a little bit of water and oil. Once heated, the water turns to steam, increasing in pressure until the starchy insides turn into a hot, molten gel. At 356 degrees Fahrenheit, the internal pressure reaches 135 psi and the shell erupts, spewing molten starch that expands and cools into an airy foam that is ideal for absorbing flavors like Naranjo and Shendo’s subtle Native green tea infusion or a bold sweet and salty maple seasoning. 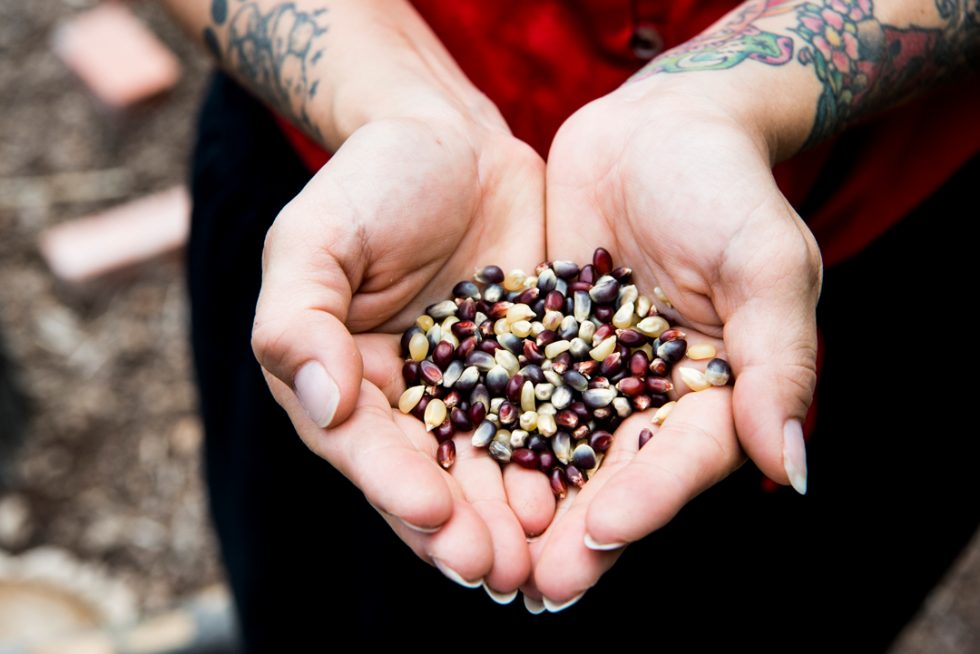 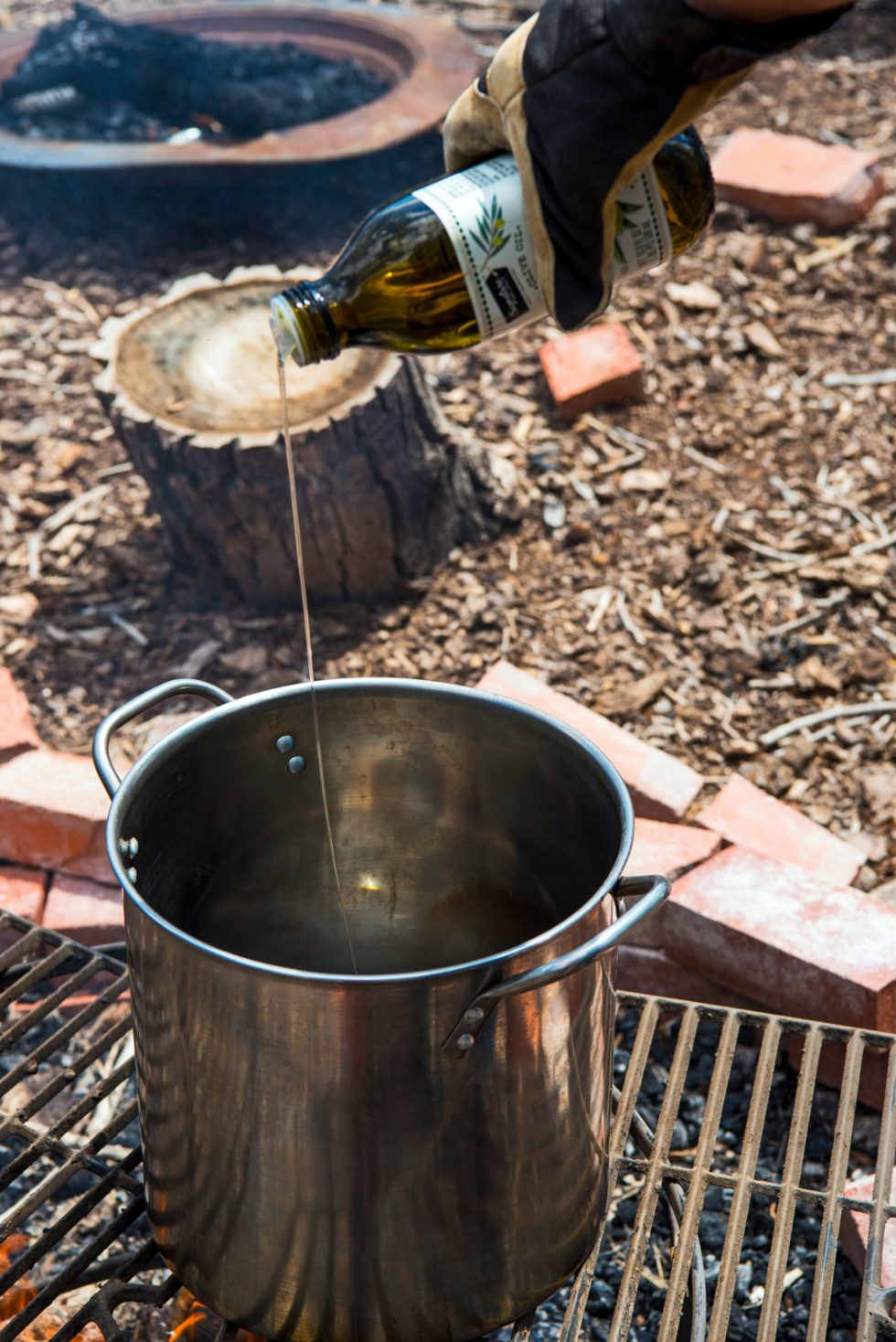 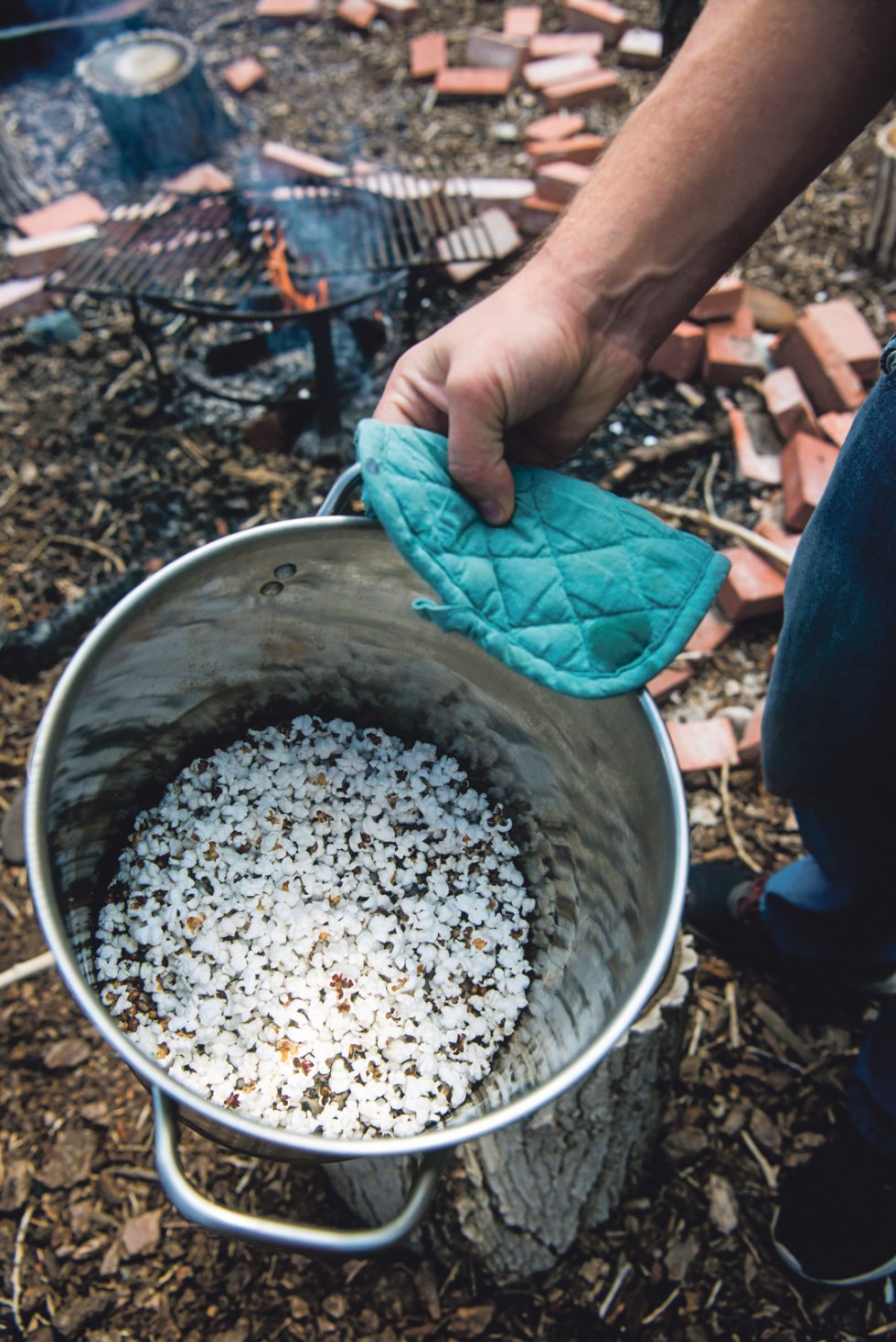 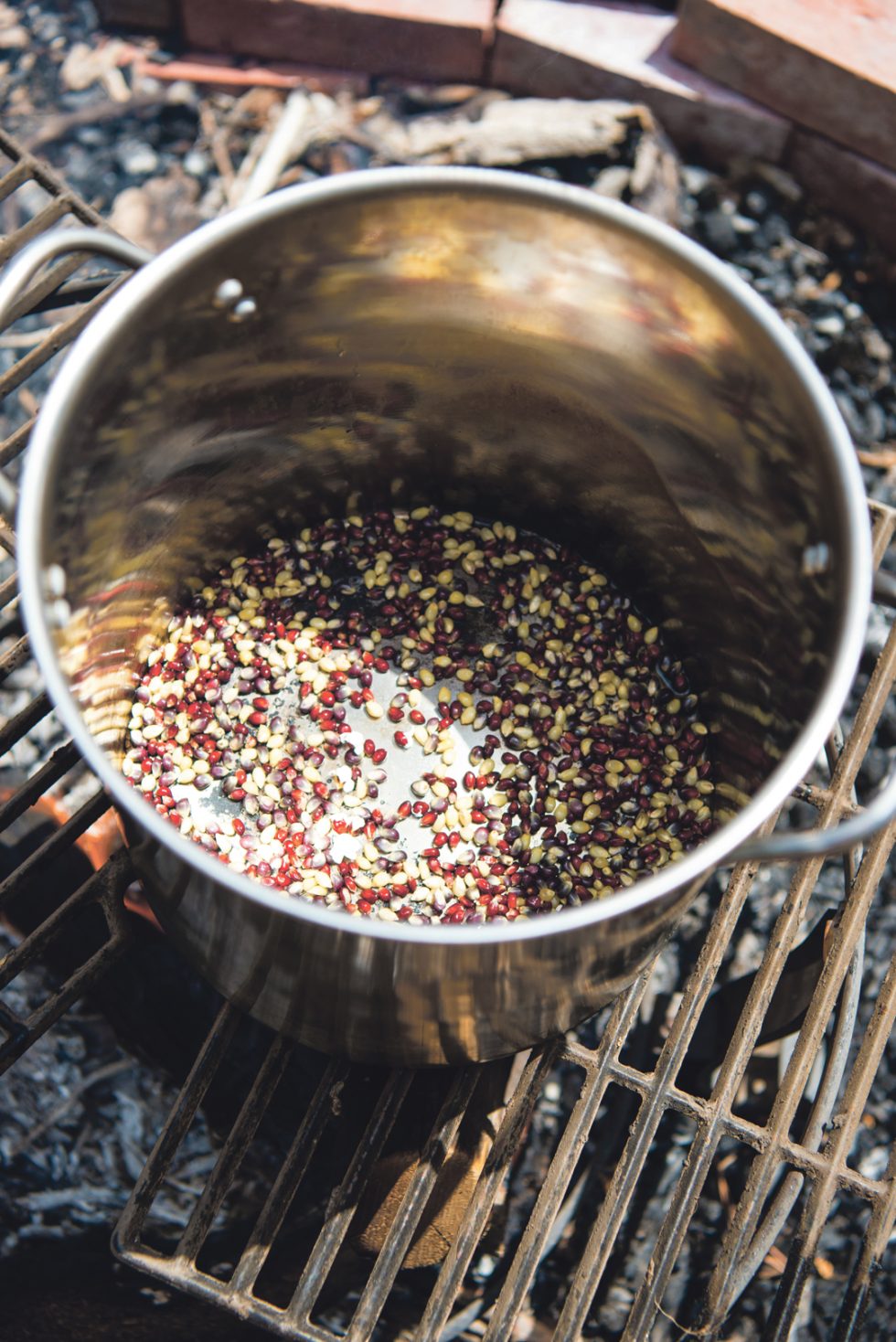 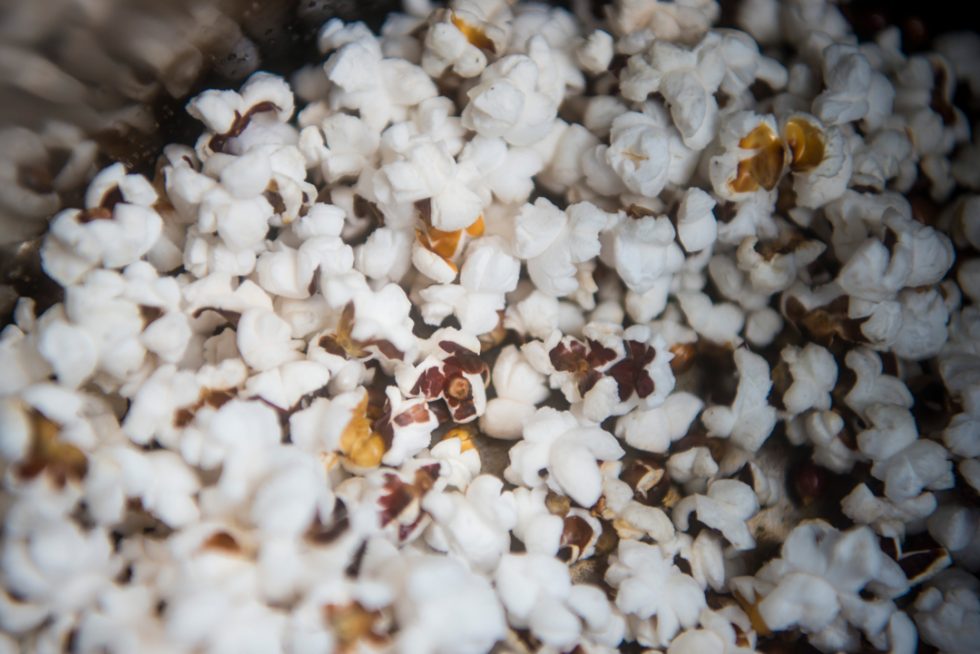 The corn popping in our kitchens are all varieties of Zea mays everta, not to be confused with its cousin whose name sounds like a Hogwarts spell—Zea mays‘ convar. saccharata var. rugosa, or sweet corn—and which is eaten as a vegetable rather than a grain. All types of Zea mays are indigenous to the Americas, and the type we know now as an iconic movie snack is a variant of the flint corn that was domesticated in the Tehuacan Valley of Mexico ten thousand years ago and in the 1500s was given the Spanish name maíz, from the Taino word mahiz. The oldest known words for popcorn are momochitl, from the Nahuatl language, and piscancalla, from the Inca.

The Aztec and Inca people took popcorn seriously—indeed, maize is sacred to just about every Indigenous people in the Americas as a crucial food source dense in carbohydrates, protein, and vitamins like B6 and iron. In the sixteenth century, Father Bernardino de Sahagún wrote of an Aztec popcorn dance performed by young women adorned in popcorn garlands and headpieces. People have discovered Aztec funeral urns displaying a maize god wearing a popcorn headdress, and the Inca are known to have decorated bodies with popcorn before burial.

During the 1820s, the steel plow revolutionized farming and the Midwest became farmland, resulting in the first commercial sale of popcorn, sold as “pearls” or “nonpareil.” Why? Because the word corn is actually Old English slang for whatever a group’s most commonly eaten cereal plant might be. For the English, corn was wheat. For the Irish, corn was oats. And over here in the New World, corn was maize.

Therefore, all American corn is technically “Indian corn,” say Naranjo and Shendo, not just the pretty blue, purple, and red corn you see in wreathes and ristras. But to keep things simple, we’ll just refer to Zea mays everta by its most slangiest of names—popcorn—the moniker John Russell Bartlett gave it in 1848 in his Dictionary of Americanisms.

It wasn’t until the 1893 World’s Columbian Exposition in Chicago that the art of popping corn took a modern turn. An inventor named Charles Cretors unveiled the world’s first commercial popcorn machine. Just like something from a Tim Burton movie, the contraption consisted of a steam engine attached to a peanut cart. Suddenly, popcorn wasn’t just something “Indians” and farmers ate, but the modern man’s snack of the Industrial Revolution. Anywhere that people gathered, popcorn vendors could be found. But, steam engine or not, popcorn was still not refined enough to make its way into the clean, gilded halls of movie theaters until the Great Depression once again changed the playing field.

At five to ten cents a bag, popcorn was something almost anyone could enjoy, and according to an online exhibit at the National Agricultural Library, popcorn was one of the few businesses that saw a boost during the Great Depression. Around this time, movies started being made with sound, opening their popularity to everyone, not just fancy folks who could read. Faced with a massive economic downturn and larger accessibility to the average Joe, movie theaters caved in and opened their doors to popcorn—and have never looked back.

While many food fads stagnate, popcorn maintains an uncanny ability to evolve and adapt alongside the humans that enjoy it. During World War II, sugar was rationed, but corn was a cheap and accessible commodity, and once again popcorn soared in popularity. In the early 1980s, popcorn saw another technological shift as microwave popcorn hit the shelves. This spring, the Million Insights market research firm projected that popcorn would be a $6 billion industry by 2028.

In Albuquerque alone, there are seven gourmet popcorn purveyors, including The Cornivore, Walker’s Popcorn Company, Popcorn Cannery, and Pat’s Popcorn Pit. Meanwhile, restaurants around the country are pushing popcorn boundaries. At Indian Pueblo Kitchen, following their gourmet popcorn appetizers, Naranjo and Shendo take a more traditional approach. Their Puebloan Gather Plate offers guests a sampling of foods that were eaten precolonization. Alongside cured salmon and house-made amaranth, quinoa, and corn tortillas is a taste of a Pueblo staple called parched corn.

Similar to corn nuts, parched corn comprises maize seeds before their insides get hot enough to erupt. Chef Shendo remembers growing up watching his grandma cook parched corn in the ground next to a fire, while Chef Naranjo experienced a more newfangled approach of cooking the corn directly over the fire in a cast-iron pot.

Whatever your popcorn preference, it all comes back to fire and maize, two things humans have been taming since the origins of civilization. It makes sense that popcorn has become synonymous with the movies, since cinema mirrors much of our culture. They both, in their own way, tell the story of life among the humans. 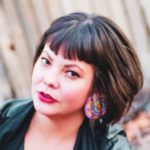 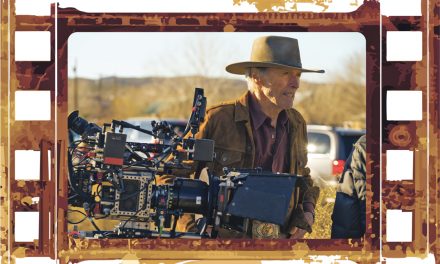 A Taste of Local Film History 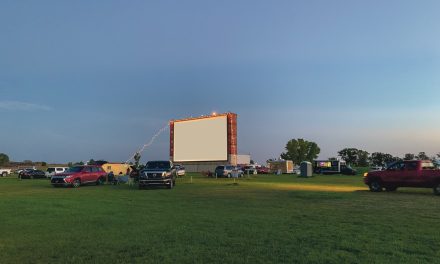 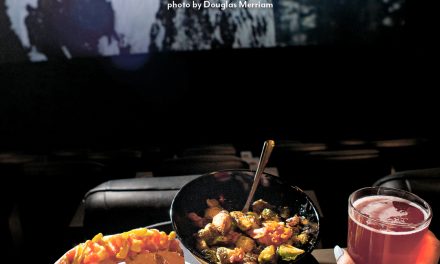 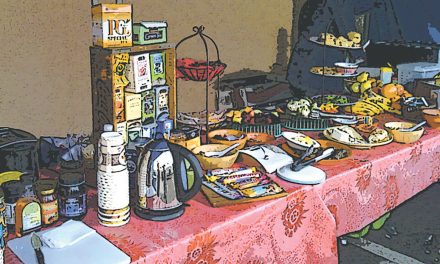