Is the food mostly Southwestern?” an out-of-state friend asks over the phone. “Or is that a myth?”

It’s not Southwestern, I want to say, but my aim is to talk him into a visit, not split hairs about culinary regionalism, so I rattle off other cuisines available in our remote land and move on. Still, the question reverberates. Maybe it strikes at the differences I’ve encountered in the foodways of the Southwest—the Texas chili dumped all over my omelet when I asked for chile at a diner in the panhandle; the Mission-style burritos born in San Francisco and more or less ruined by corporate chains in the decades since; the tomatillo-and-cilantro posole I’ve taken to ordering whenever I’m in Flagstaff.

Maybe it’s just an old knee-jerk reaction against the stereotypes associated with our state. “Very nice, the great South-West, put on a sombrero and knot a red kerchief round your neck, to go out in the great free spaces!” D. H. Lawrence wrote in 1930, summing up New Mexico as it was then known to Americans who knew it at all.

How to explain that a place like La Pasadita Cafe in Socorro can use for its logo a man in a sombrero napping in front of a cactus, and yet escape the clichés of some cartoon Southwest?

In my years living elsewhere, restaurants claiming to serve New Mexican food would crop up from time to time. Sometimes it was just a dish or a handful of dishes on a “Southwestern” menu. Drawn by longing or by friends expecting me to be delighted, I would invariably find myself sitting at their tables, puzzling over a meal that had little if any connection to the cuisine of New Mexico.

“People say, ‘I know what I like,’” the chef Mark Miller reflected a few years ago in an interview with Local Flavor, “and I say, ‘Not really, you like what you know.’”

But it wasn’t that I didn’t like the green chile tart or the green chile artichoke dip, the goat-cheese-stuffed relleno or the cumin black beans or the pepitas sprinkled over everything. If I hadn’t been craving something distinct, I might have liked the sauces—the almost-there ones, like the mild green chile sauce with chunks of stewed tomato that I ate with a tortilla, pretending it was a vegetarian stew, and also the nowhere-close ones, like the red pepián fronting as Chimayó chile.

Fast-forward to now. Challenged to check my marrow-deep conviction that I know exactly what New Mexican food is, I take a dip into the cookbook archives.

“The New Mexican way of making enchiladas is as follows,” wrote Fabiola Cabeza de Baca Gilbert in Historic Cookery, published in 1931 and generally considered the first New Mexican cookbook. “Place a fried tortilla on a plate, sprinkle with grated cheese and chopped onion, cover with chile sauce No. I or II, and place another tortilla on top; repeat the process; then pour plenty of chile sauce over the top.” The addition of an egg, optional for Cabeza de Baca, is mandatory in Erna Fergusson’s recipe, published three years later. 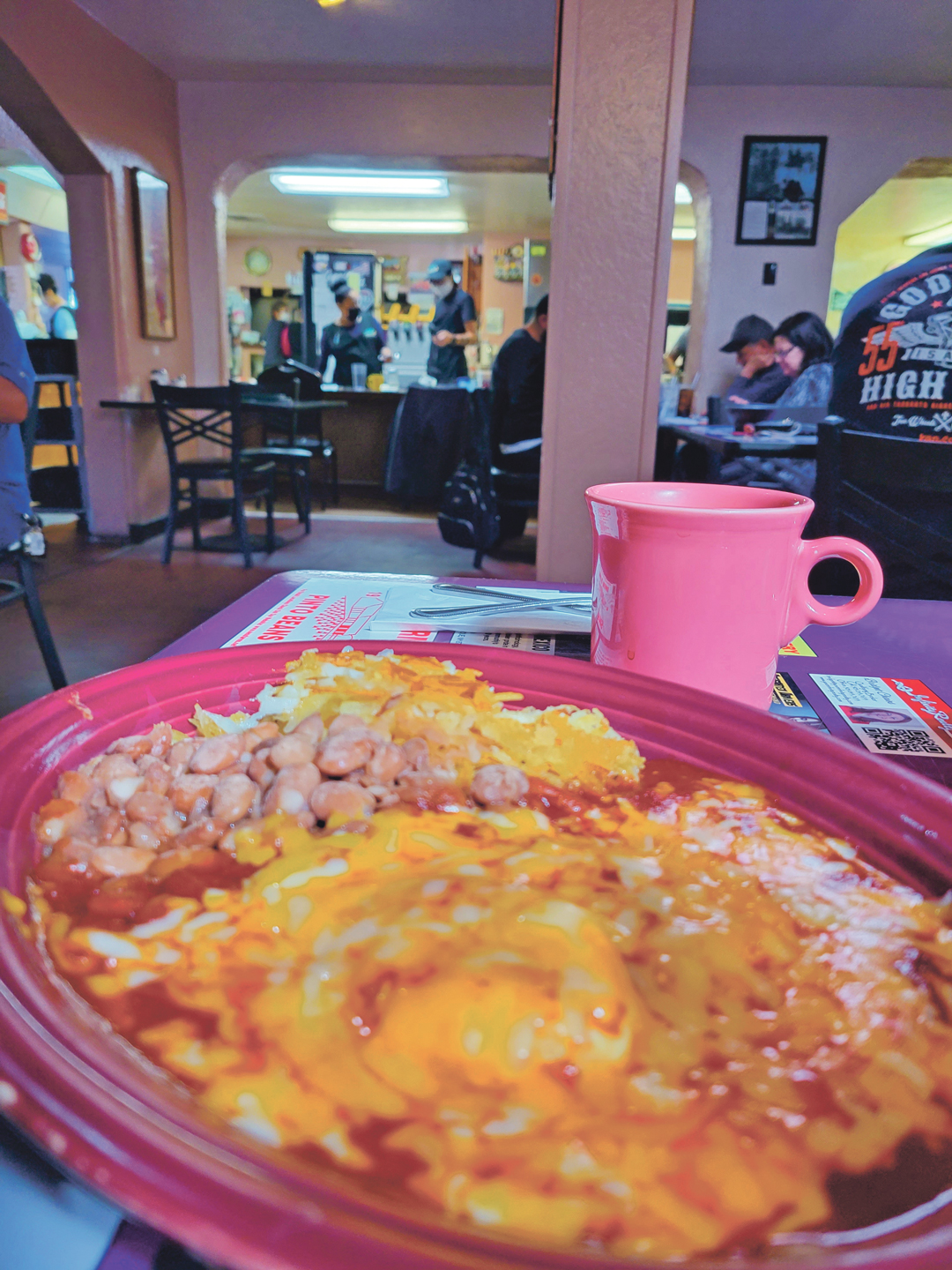 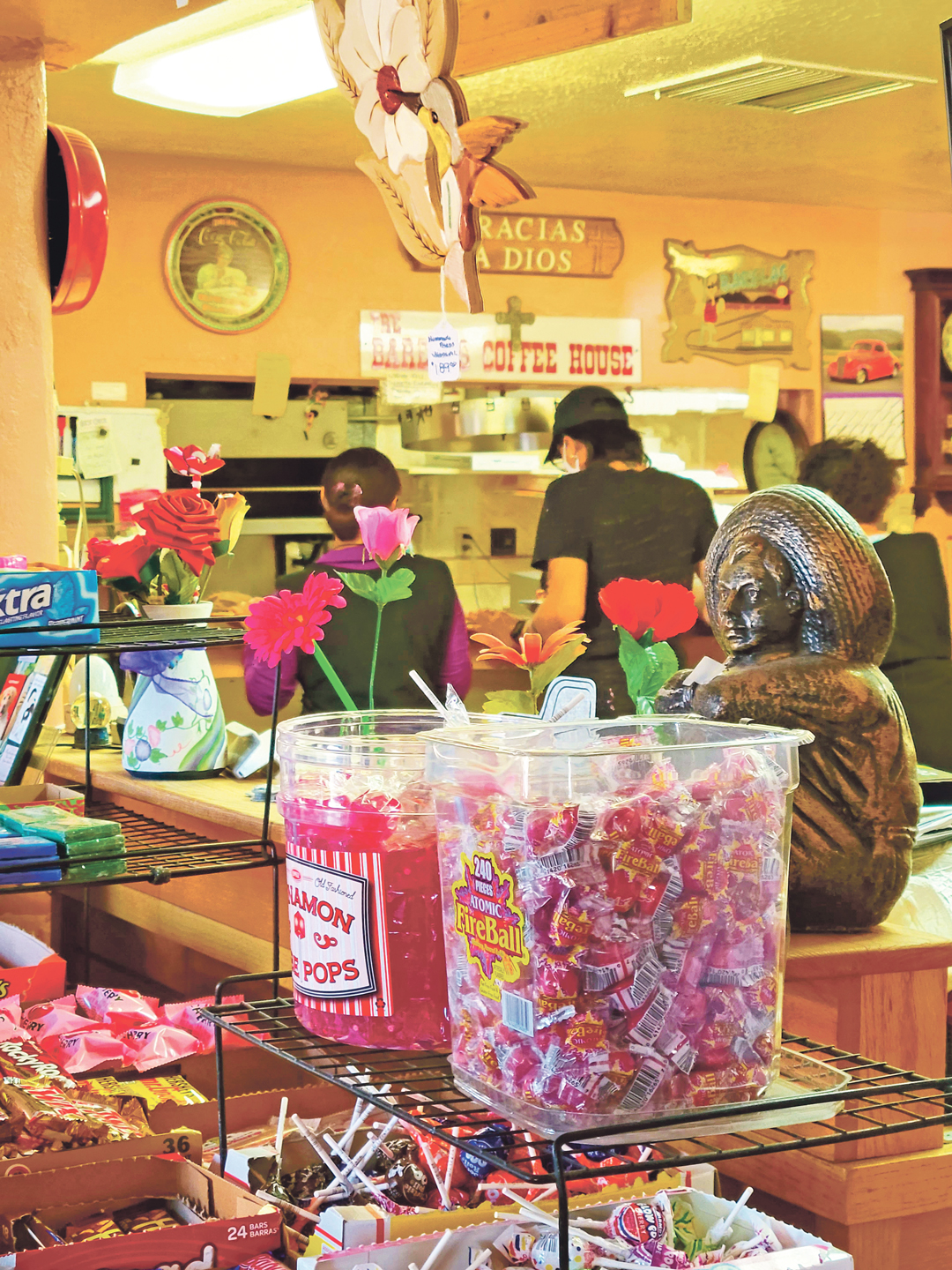 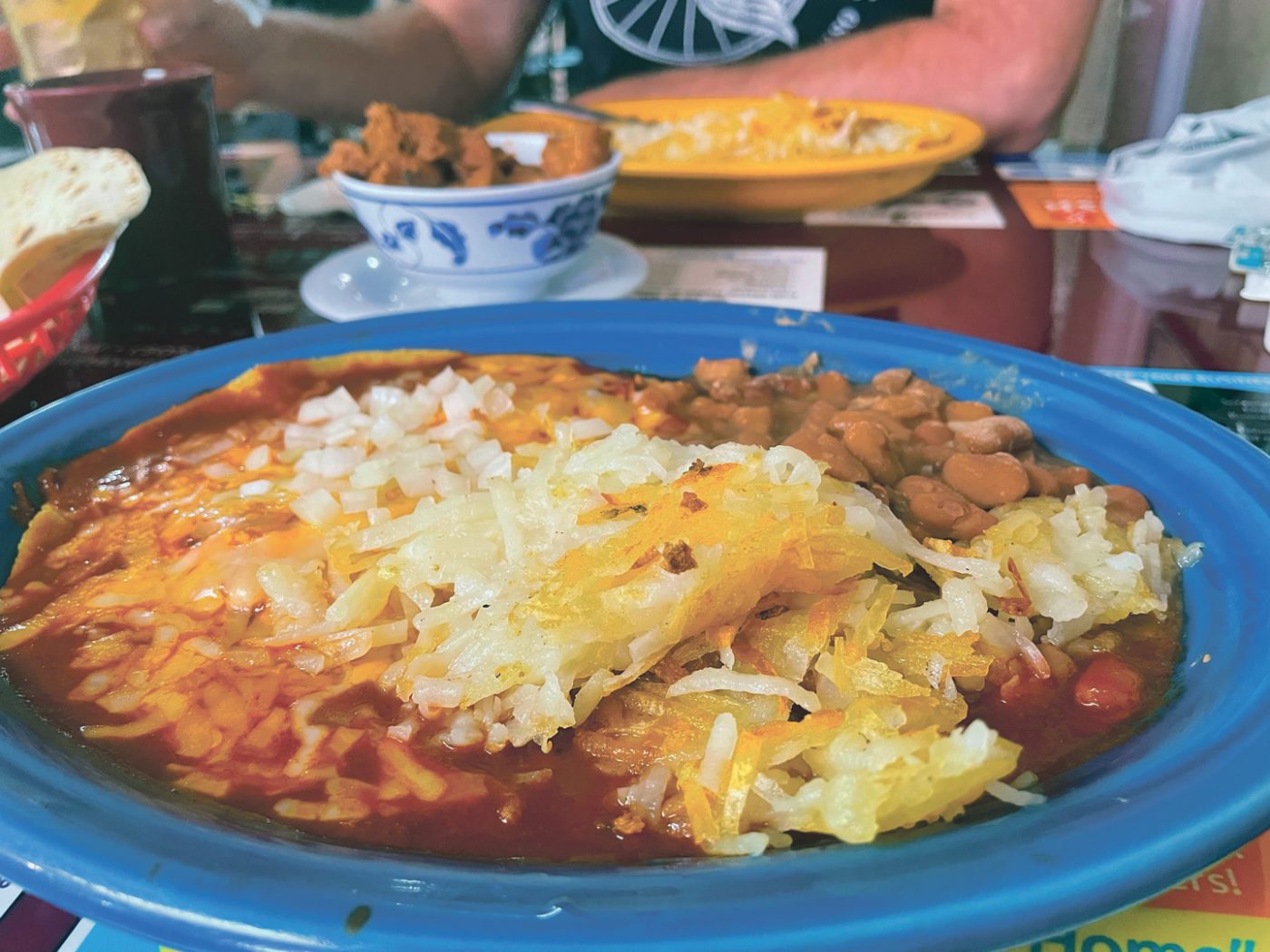 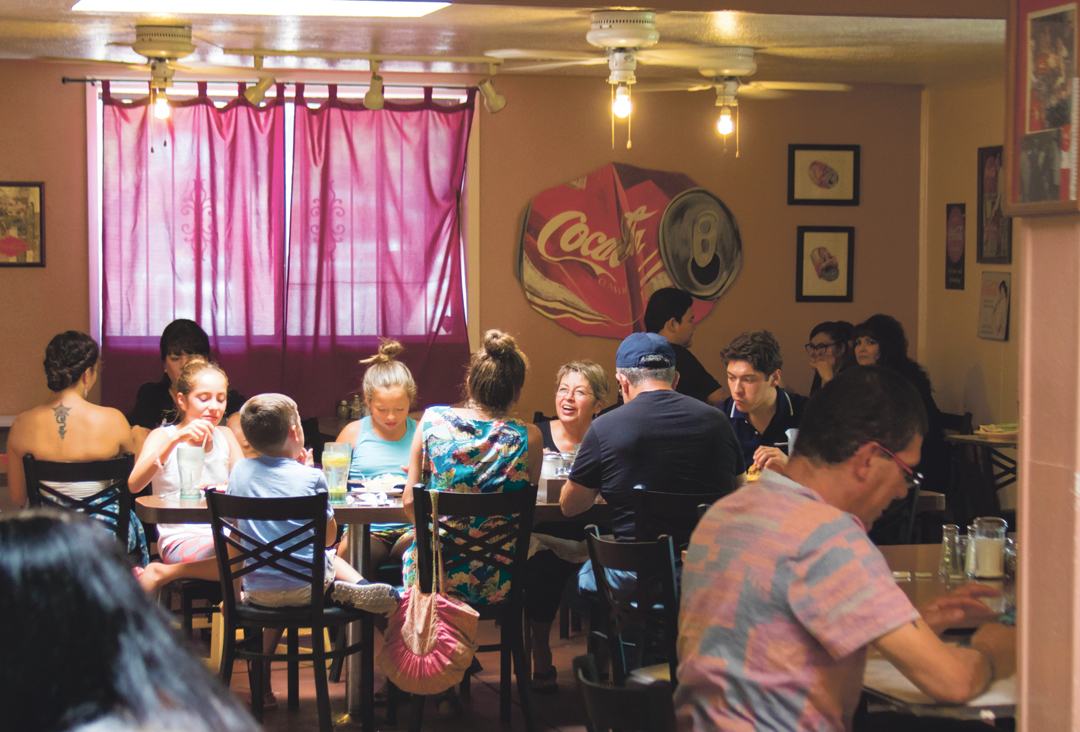 “Onions, eh?” the server at La Pasadita asks when I order the blue corn enchiladas with red. The atmosphere is informal, the front dining room filled with living plants. Two women at a neighboring table discuss the drama of a couple they know while I revel in the abundance of red chile on my plate. The chewy texture of the blue tortillas, the yolk of the egg, the house-made beans, refried but not pureed, that retain some toothsome texture. Then there’s the savory empanada—a delicacy that makes a strong showing in the cookbook record (and in many a family recipe rolodex) but on contemporary menus has become a rare treat. La Pasadita’s, made with potatoes and ground beef, pairs exquisitely with a simple green chile sauce designed to showcase the flavor of the chiles themselves.

“I like to taste my food,” people who can’t tolerate spiciness have told me, drawing on that strange practice by which those who can’t do a thing find the means to passively cut down those who can. In fact, I like to taste my food too, and I can taste this chile, these tortillas, even the onions and cheese as my mouth sings. I can taste the slight fruitiness of the green chile, the melded flavors of the broth, along with the flaky pastry of the empanada. 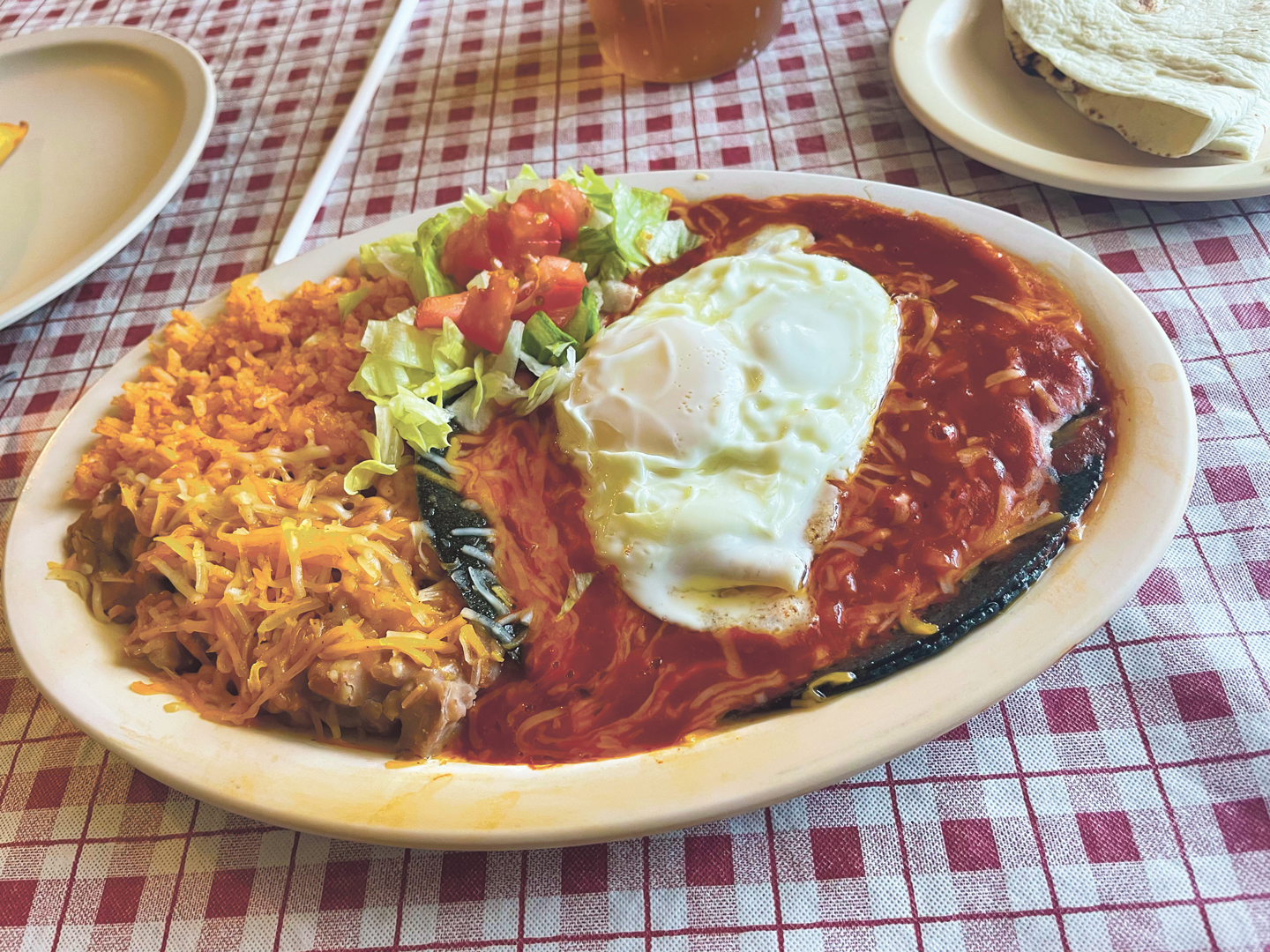 I like elevation. But sometimes what I want from a kitchen is humility. There is exploration, adventure, the mouthfeel of uni eaten right out of the shell, the studied playfulness of the tasting menu—and then there is comfort.

The food of your homeplace, when you’ve moved away, can become a sort of imagined country—a landscape invented through storytelling and the imprints of habit. Now that I live in New Mexico again—now that I can get chile anywhere I want, now that I have readjusted to its abundance and been introduced to a history that is equal parts truth and myth—I realize that more than signature dishes were missing from most of those Southwestern-inspired venues: they tended to smell of fajitas, margaritas, night-out perfume, not of coffee and chile and pintos.

The Barelas Coffee House has been serving huevos rancheros since 1978. The walls are filled with write-ups from the Albuquerque Journal and USA Today and the erstwhile NuCity, along with vintage Coke ads and coverage of Barelas musicians from way back when. The pintos are served whole. The hash browns are crispy and the eggs as I ordered them. The dish has evolved since Cabeza de Baca’s time; here, as at most places, it is served with an iteration of chile sauce No. I, sans tomatoes. Then there is the Red or Green Chile with Beans, a favorite, served with tender posole whose unmistakable maize profile might be the antithesis of what is being done to the majority of corn in the United States: hearty, coarse, accented but never muted by the flavors of the chile and the pork. Their recipes are consistent, reliable, familiar—a word that in Spanish means “of the family.”

“Thanks for coming by,” the cashier says as she rings us up. She says her car knows the way here and the way home. “I tell people, if I’m not here, come find me because something’s wrong.”

Romance imbues most every culinary history, whether it be the tale of one family’s chile recipe or the going story of a regional cuisine. (Google “the Southwest” and you will find half a dozen competing visions of our region’s boundaries.) No culinary tradition is static—many a contemporary New Mexican would balk at the green olives in Erna Fergusson’s enchiladas—and the formality of putting recipes to paper is inevitably tangled with the power dynamics of the written word and the legacy of colonialism.

Yet it’s true, as Lawrence proclaimed, that mornings in New Mexico are magnificent, and proud, and fierce. And as much as the classically trained innovators deserve attention and praise, so too do the neighborhood institutions where tradition lives, from the lately shuttered Angelina’s in the Española Valley to the (hopefully) struggling-back-to-life Nancy’s Silver Cafe at the foot of the Pinos Altos, with too many beyond and in between to name. 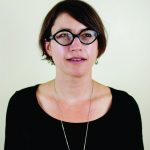 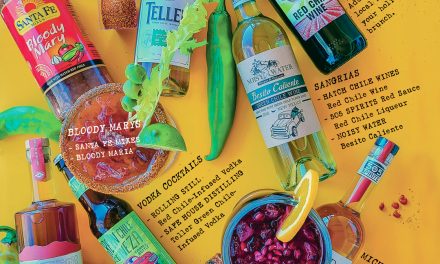 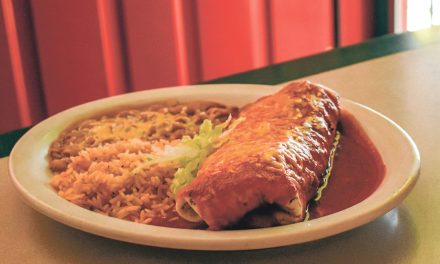 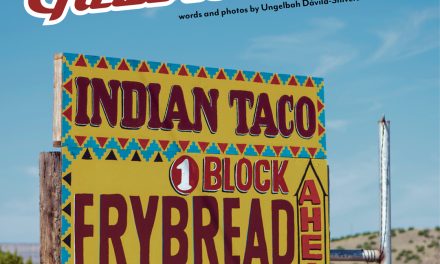 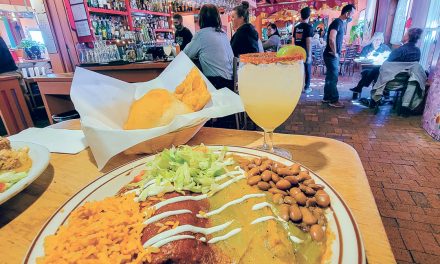